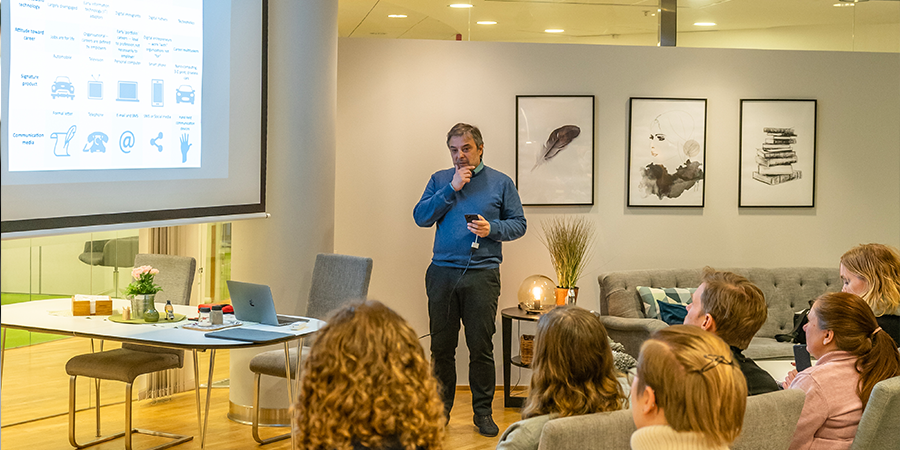 During one of the last few days of February this year, Vladan Ilic, medical doctor and owner of Westerdokters and Flexdokters, visited Uppsala and the Aurora Innovation headquarters. He spoke of the need to revolutionise the way we think about primary care in order to meet the demands of future generations of medical professionals and patients.

Six years ago, Dr. Vladan Ilic started working together with Aurora Innovation in the Netherlands to implement Aurora teleQ at his practice in Amsterdam. It was a fun and challenging partnership from the start, since Dr. Ilic and his team had some radical ideas on how to use the product. They wanted to create a new way of working for primary care practices. Following the praxis of “less is more” they decided to build a new type of medical practices by removing the non-essentials. What’s actually essential in a healthcare meeting? The doctor and the patient. This way of thinking would of course be reflected in how they would like to use Aurora teleQ. The doctors are the ones answering the phones and calling back their patients.

A doctor working at a traditional private practice in the Dutch primary care sector spends on average 10 minutes on each patient. The burnout rate in family medicine is around 45%, and new doctors aren’t expressing a desire to start their own practices. Only about 10% say that’s the path they’d like to take. This is concerning since the Dutch system is built on private practices, funded by insurance companies.

The key thing for Westerdokters has always been their willingness to put the patients’ needs first. Dr. Ilic and his team chose to focus first on their website. They wanted to create a user experience that made it easy for patients to quickly figure out how to get in touch, get a prescription, book an appointment and so on. The next step was to create a web application, since the mobile phone penetration in the Netherlands is very high. In this app, patients can book appointments, chat with their doctors or ask for prescription refills.

Three months after implementing this way of working in 2016, 20% of their patients were using the app. Three years later that number was 80%. Today, each patient gets an average of 20 minutes of their doctor’s time during appointments – double the amount of the Dutch average. At the same time, the stress has been reduced for the doctors as they can see between 2-3 patients per hour instead of 6. Meanwhile, the number of listed patients is almost double the average for other primary care practices in the Netherlands.

Dr. Ilic stresses that this way of working isn’t dependent on location. Flexdokters was created when doctors in remote, rural locations realized they could adapt a similar strategy. He tells the story of a woman living in a village, running her practice from home with the help of the online tools provided by Dr. Ilic and his team. Aurora teleQ, as well as the other online tools that form the app, is managed by all doctors in the Flexdokters network. One time, he says, a doctor in a remote village was able to identify that a patient in another village hundreds of kilometers away needed an ambulance due to heart issues. Despite the distance the patient’s life was saved.

A common misconception is that digital healthcare solutions are only used by young people. However, Dr. Ilic and his team help patients of all ages and demographics. Even in the rural locations this new way of working has been a success, and rural areas are famously depopulated by younger people.

– The most important advice I can give to anyone wanting to try different approaches to mend a broken healthcare system is to keep it personal and to always trust and listen to the patients. And to never get stuck in old mindsets and ideas of what is and is not possible. The least you can do is try, Dr. Vladan Ilic adds as we speak briefly after the presentation.

We use cookies to give you the best experience on our website. If you continue using this site you accept the use of cookies. OkRead more